In 1979, when she was fresh out of art school, Sarah McEneany bought a house in the then-largely industrial neighborhood of Callowhill. The property was affordable, spacious, and a short walk from Center City. It was also surrounded by towering factories and street-level workshops.

“It would be busy during the day and then at night it would be desolate and empty and kind of scary,” McEneany says. For a while, it seemed like her only neighbors were businesses.

But a small number of people did live in Callowhill. McEneany just had to find them. “I had to sort of discover people,” she says. “I might be out walking my dog and I’d meet somebody and find out, ‘Oh, you live two blocks away.’”

McEneaney, who has lived in the same house for more than 35 years, says her decision to move to Callowhill was maybe a little naive, given the high crime rates and lack of community support at the time. She doesn’t regret it, though: The fact that living there took some extra effort, and a little imagination, suited her just fine.

Indeed, several years after the move, that outlook on her adopted home would lead to another crucial discovery. While hiking along the Viaduct, an abandoned elevated railroad that spans the neighborhood, it occurred to McEneany that the rusting, overgrown hulk would make a great park.

“It would be busy during the day and then at night it would be desolate and empty and kind of scary… I had to sort of discover people.” — Sarah McEneany

This was years before New York City’s High Line Park popularized the concept of turning a former rail line into a public space. But for McEneany, the idea made sense. Not long after the Reading Railroad decommissioned the Viaduct in 1984, plants and weeds sprouted across its tracks, making it greener than much of the surrounding area.

Beginning in the early 2000s, McEneany and John Struble, an artist and fellow Callowhill resident, advocated for the City to transform the Viaduct into an elevated park that would connect the neighborhood with much-needed green space. They hosted tours, met regularly with officials, and worked tirelessly to keep the project in the media.

Now, their work is about to pay off: A quarter-mile stretch of the Viaduct, extending from Broad Street to 12th and Callowhill streets, is awaiting the last round of funding necessary to start its conversion into a park. Studio Bryan Hanes, a design firm known for its work on Sister Cities Park and the Porch at 30th Street, has unveiled a rendering that features swings, seating areas, and native plants.

The multi-phase project, funded in part by a $1 million grant from the Reimagining the Civic Commons initiative, will eventually transform the entire railway east of Broad Street into a linear park. The Viaduct Rail Park, as the project is now called, has gained powerful supporters in recent years. Both the Center City District, an influential neighborhood improvement district, and the William Penn Foundation, one of the largest Philadelphia-based philanthropies, have thrown their weight behind the project.The Center City District has also helped raise money for the project and retained Bryan Hanes for the design.

Ultimately, though, it still depends on local support. After all, it wasn’t until Callowhill began to come together as a cohesive community that the idea made the leap from dream to reality. 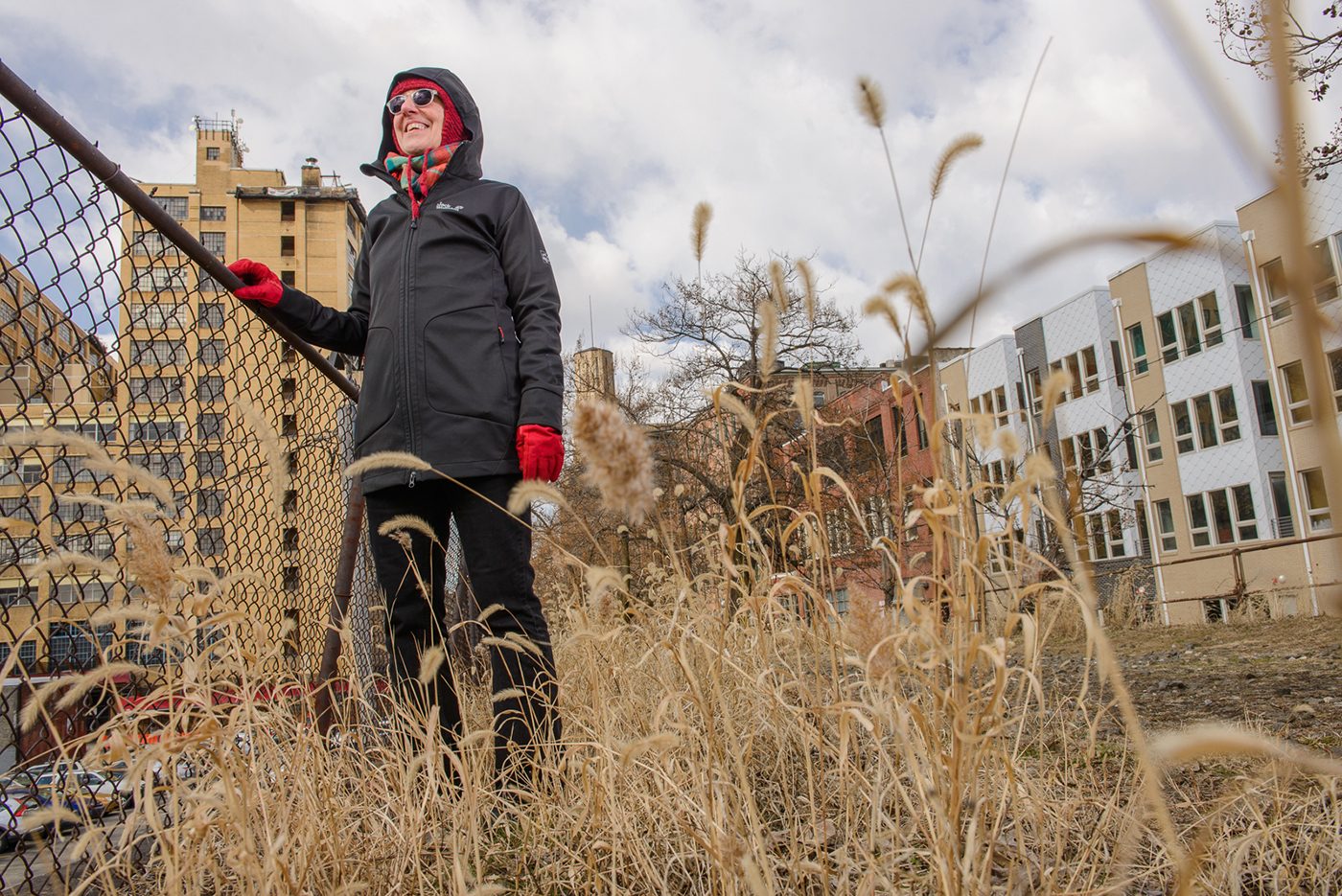 Sarah McEneany at the Noble Street section of the Rail Park. 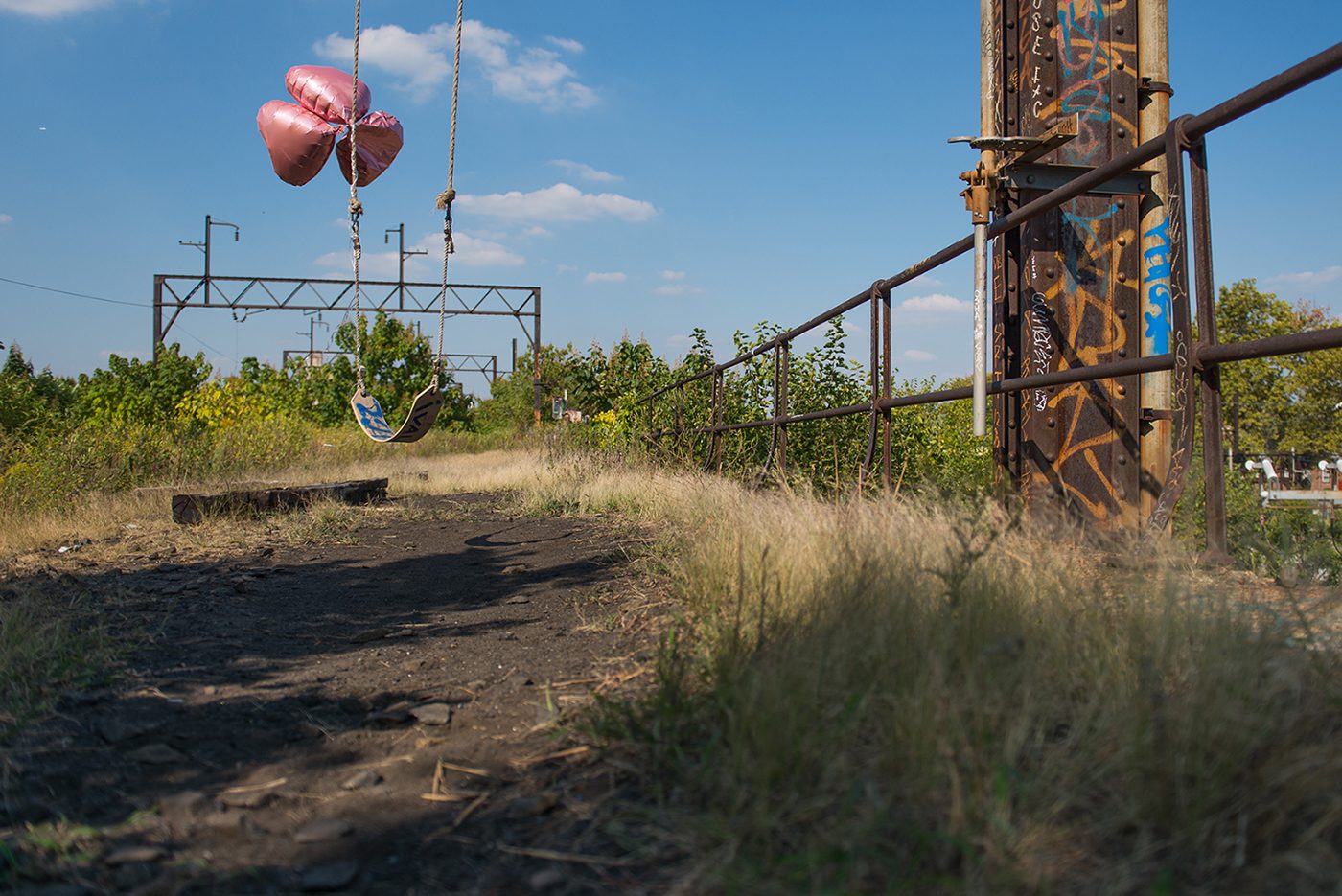 The Rail Park is overgrown, but still shows signs of life.

Besides occasionally running into one another, the scattered residents living in Callowhill when McEneany arrived had not yet formed a community in the traditional sense. Block parties, clean-up days, and civic associations were still a long way off.

That began to change as developers turned a number of the neighborhood’s old factory buildings into lofts and apartments. The conversion of the Beaux Arts Building at 12th and Callowhill streets in the late 1980s was a watershed moment. Suddenly, McEneany recalls, the streets felt less barren as new neighbors flooded the area.

Soon afterward, longtime residents teamed up with the newcomers to fight the construction of a minimum-security prison at Broad and Buttonwood streets, which would have been the second prison in the neighborhood at the time. Then, in 2000, the community came together for an even bigger fight: A proposal for a new baseball stadium just north of Center City that would have led to the demolition of whole sections of Callowhill and Chinatown.

“People didn’t realize there was anything here but blight,” McEneany says.

“It’s a neighborhood without stoops… without many roof decks or balconies. So there’s a lack of green outdoor space and lack of community outdoor gathering spaces.” — Michael Garden 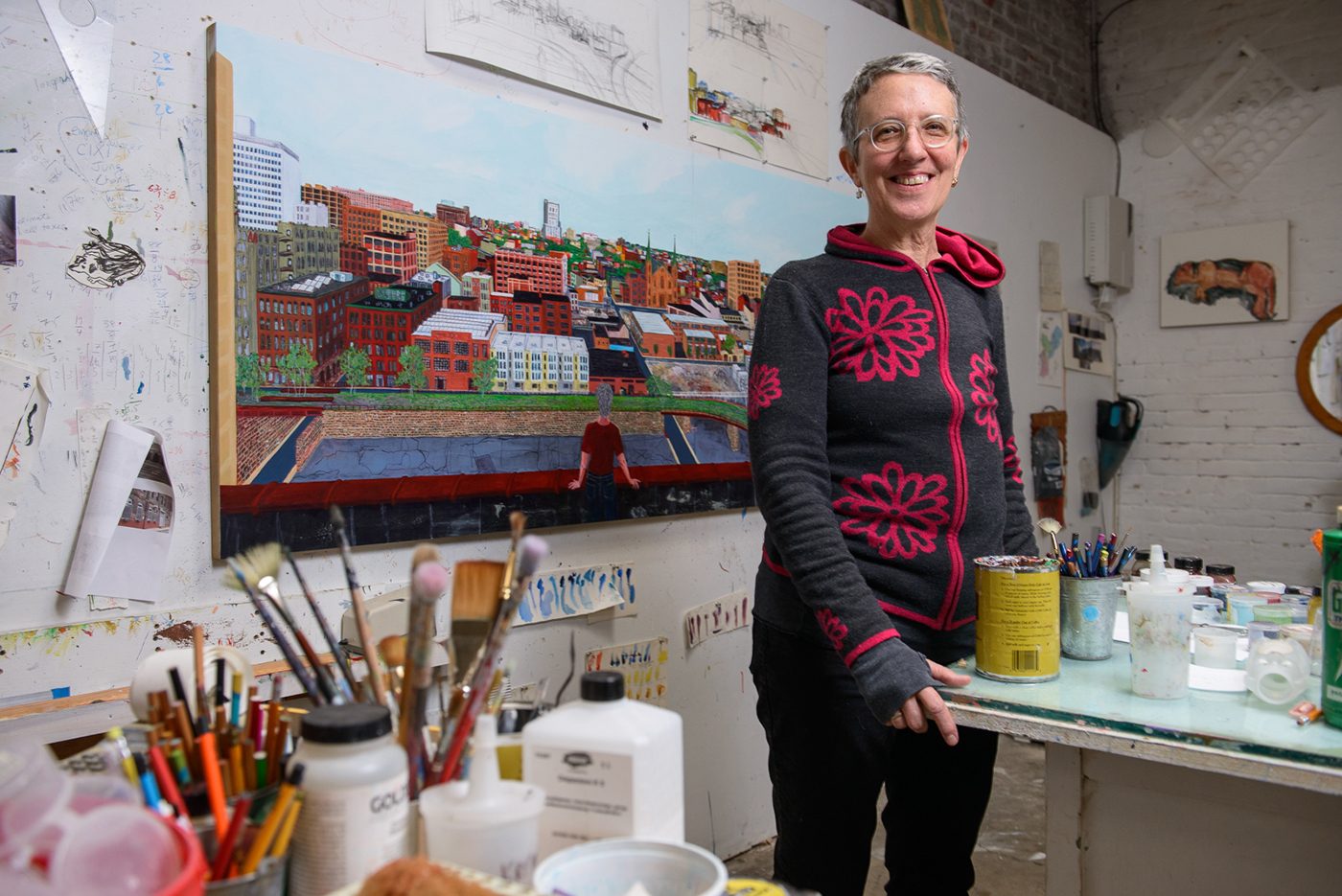 Sarah McEneany in her Callowhill studio.

While the stadium was never built, in part due to community resistance, the experience laid the groundwork for a deeper level of engagement among locals. The Callowhill Civic Association formed in 2003 to represent the community in talks with developers and to fulfill a number of services, such as organizing street cleaning days. Callowhill residents also forged closer ties with community activists in Chinatown, which for years had been edging its way north across the Vine Street Expressway.

Vacant lots and small industrial firms remain in Callowhill, but residential development has reached a fever pitch. New businesses pop up every year, and cultural attractions like the Asian Arts Initiative and Underground Arts serve to break up the commercial space and enliven the streetscape.

Yet Callowhill still lacks some of the basic amenities that befit a neighborhood. For one, it has few local parks or green spaces. With the exception of a ribbon of small parks along the busy, noisy expressway, Callowhill remains a concrete jungle decades past its industrial peak.

Even as the community became more united — in general and in its support for the Rail Park — it still needed to get outsiders, particularly fundraisers, to see the value in an abandoned railroad.

The Viaduct Rail Park will ultimately span 3 miles and bridge 50 city blocks in the heart of Philadelphia. With construction plans divided into sections, Phase 1 will be the first portion to be developed.

“I suddenly realized that this isn’t a linear park that connects point A to point B… this is an amenity for an emerging neighborhood.” — Paul Levy

One Rail Park supporter is Paul Levy, president of the Center City District. But it took time for him to see how the proposal would work. “I’ll freely admit that when I first heard about it, I thought it was a foolish idea,” he says.

It wasn’t until he had a chance to take a stroll down the High Line in New York City that the concept clicked. “I suddenly realized that this isn’t a linear park that connects point A to point B,” says Levy, who faced his own share of detractors as he fought to revitalize Center City in the 1990s. “This is an amenity for an emerging neighborhood.”

In effect, the Rail Park is a chance to spur development in Callowhill, which despite its significant growth in the past decade is still riddled with empty lots and abandoned buildings. Now that the Rail Park is in development, Levy points out, new construction has already begun around the long-neglected Viaduct. This will likely increase if and when the project is completed.

McEneany welcomes the new development. “I lived here for a long time and it was desolate and scary,” she says. “It used to be in the old days that I’d hear a noise at night and think, ‘Who is trying to break in?’ Now when I hear a noise at night, it’s my college-student neighbors.”

Visit the future site of the Viaduct Rail Park

The Viaduct Rail Park is one of five public space projects in Philadelphia’s Reimagining the Civic Commons Initiative — the pilot program in a national initiative exploring how improving, repurposing, and connecting civic assets can lead to greater social and economic integration and opportunities. Convened by Fairmount Park Conservancy with support from the John S. and James L. Knight Foundation and the William Penn Foundation, Philadelphia’s five-member Civic Commons Collective is serving as a three-year “learning laboratory” to explore new ideas and test new strategies related to “reimagining the civic commons.”